Home / Cyber Liability / Are Third-Party Apps a Threat to Your Business?

Not all apps are created equal

More and more businesses have been allowing employees to use their personal mobile devices as a primary means of communication in the workplace.  The increased usage of employee-owned smartphones, though convenient, can also pose a 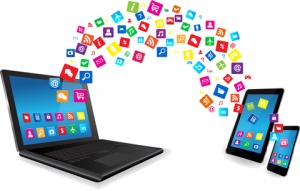 serious risk to security; questions may also arise concerning the control and ownership of company data.   It is important for your business to establish strict guidelines for the use of personal mobile devices in the workplace. For example, there should be a clause in company policy allowing for the remote wiping of mobile devices upon termination of employment. Further, company data should be kept separate from personal data, and the use of third-party applications should be kept to a minimum.

With the recent phenomenon of mobile mass storage devices, keeping your company’s confidential information private has become increasingly difficult. Where there was once an established perimeter protecting businesses from outside threats, there is now increased exposure. This is the price we pay for on-demand data access.How can you limit your exposure? As stated above, by establishing guidelines.It has been estimated that in 2013 alone, over 70 billion apps will be downloaded, and with them, the potential for malware and tracking software. For this reason, it is important that your employees be aware the effect their personal data habits have on the company information stored on their phones.

Not all apps are created equal, and some are potentially more dangerous than others. Fiberlink Communications is a mobile device management firm that manages over 2 million devices for businesses around the world. Using their vast wealth of experience, they have compiled the top 10 blacklisted apps for both iOS and Android devices.

Ready to get your free personalized technology insurance quote?

Help protect yourself and your IT business by getting your fast and easy no-obligation insurance quote. To get started, simply fill out our convenient 4 minute online quote request form and it only takes 2 more minutes to purchase coverage or call us toll free at 1-800-622-7370 to speak to an expert licensed insurance specialist today.

Get Professional Liability and General Liability Insurance combined for as
low as $65/month!